Edward Faieta was born in Steubenville in 1928 and grew up on the streets in the Italian neighborhood of Steubenville. 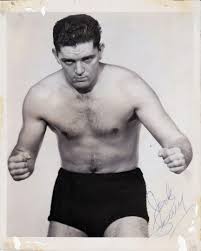 Eddie became a wrestler after being a boxer, where he had been a sparring partner for Bill Conn, the light heavyweight boxing champion, in 1939 and 1940.  In the 1950’s and ‘60’s, Eddie was considered one of Steubenville’s street kids who left for the big cities and made a name for himself.

Eddie started wrestling in 1949, after a friend told him, “If you’re big with a good body and athletic knees and can do a somersault, you should be wrestling.”  His first match was in Louisville, Kentucky, where his promoter used him to replace an injured wrestler.  This match with Don Evans launched Ed’s career that took him throughout the country and around the world, although Ed rarely was permitted to win.  Eddie became a career carpenter (also known as gebronies in the wrestling world.)  Carpenters were guys whose role was to build up other wrestlers.  During his wrestling career, Eddie was also known as Ed Gardenia, Daniel Boone Savage, Eddie Fay, The Golden Terror, and Gypsy Moe, but his real name was Eddie Faieta.  One of Eddie’s biggest matches in his career was in 1953 when he wrestled, as Gypsy Mae, against Gorgeous George in a main event in the Tacoma Ice Arena.  Over 6,000 people attended, but Eddie Faieta was only paid $125.

Eddie continued his career as a preliminary wrestler, “just a guy whose job was to make other guys look good.”    He was a mediocre wrestler who never got a break, never got a push.

When Eddie became a pro wrestler and appeared on TV, his Steubenville pals wrote that he had made it big; but after giving 17 years of his life to the business, he became one of its tragic casualties.

Eddie left wrestling and returned to Steubenville in 1966 to undergo knee surgery and ultimately retire from the ring and become a promoter.  He opened a Wrestlers Training School in Steubenville and trained several wrestlers but couldn’t get them booked because he was not a member of the National Wrestling Alliance.

In 1988, he was living on a monthly Social Security benefit of $313.62 and was having a hard time making ends meet.  Eddie Faieta was poor, but seriously ill with diabetes and a kidney and bladder disorder associated with diabetes.  He had lost one eye and was losing sight in the other.  He lived alone in a small apartment at 815 North Sixth Street in Steubenville, where he survived on Medicaid so long as his savings account did not exceed $1,800.

Eddie Faieta died on September 18, 1993, and is buried in the Queen of Heaven Section of Mount Calvary Cemetery in Steubenville.

May he rest in peace.

This website uses cookies to improve your experience while you navigate through the website. Out of these cookies, the cookies that are categorized as necessary are stored on your browser as they are essential for the working of basic functionalities of the website. We also use third-party cookies that help us analyze and understand how you use this website. These cookies will be stored in your browser only with your consent. You also have the option to opt-out of these cookies. But opting out of some of these cookies may have an effect on your browsing experience.
Necessary Always Enabled
Necessary cookies are absolutely essential for the website to function properly. This category only includes cookies that ensures basic functionalities and security features of the website. These cookies do not store any personal information.
Non-necessary
Any cookies that may not be particularly necessary for the website to function and is used specifically to collect user personal data via analytics, ads, other embedded contents are termed as non-necessary cookies. It is mandatory to procure user consent prior to running these cookies on your website.
SAVE & ACCEPT