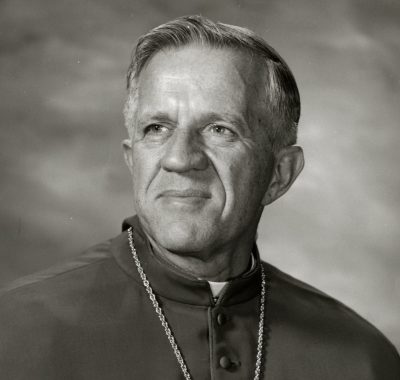 John King Mussio was born in Cincinnati, Ohio June 13, 1902, the son of John E. Mussio and Blanche (King) Mussio.  He had one brother, Thomas J. Mussio.  He was baptized and received his first communion in Sacred Heart Church in Cincinnati and attended Assumption Elementary School and St. Xavier High School, Cincinnati.

After his ordination to the priesthood in Mt. St. Mary’s seminary chapel August 15, 1935, Bishop Mussio was stationed for a year at St. Louis Church, Cincinnati and for a short time he served as an instructor in a Cincinnati high school.

In September 1936 he was sent to the Angelicum in Rome where he was awarded a Doctorate in Canon Law, he returned to Cincinnati and was named assistant chancellor in August 1939.  In January 1942, he became chancellor.  In June of the same year he was raised to the rank of papal chamberlain with the rank of Very Reverend Monsignor.

This website uses cookies to improve your experience while you navigate through the website. Out of these cookies, the cookies that are categorized as necessary are stored on your browser as they are essential for the working of basic functionalities of the website. We also use third-party cookies that help us analyze and understand how you use this website. These cookies will be stored in your browser only with your consent. You also have the option to opt-out of these cookies. But opting out of some of these cookies may have an effect on your browsing experience.
Necessary Always Enabled
Necessary cookies are absolutely essential for the website to function properly. This category only includes cookies that ensures basic functionalities and security features of the website. These cookies do not store any personal information.
Non-necessary
Any cookies that may not be particularly necessary for the website to function and is used specifically to collect user personal data via analytics, ads, other embedded contents are termed as non-necessary cookies. It is mandatory to procure user consent prior to running these cookies on your website.
SAVE & ACCEPT